Hi,
Did you reboot your Pi after you add dtoverlay=arducam-pivariety?

Yes of course, without rebooting it is not same message.

Just to add, I have updated the sensor firmware with the long exposure firmware. Don’t know if it changes something and I use the old hardware sensor version with two boards.

I was able to make the IMX462 working by following steps on your quick start guide, but then it is not possible to add any other packages on the raspbian environment. When I try to install for example opencv (but the same for any other packages) it sends a broken pipe error, missing dependencies and so on…
As I read on different forums I am not the only to have this issue and this is one of the comments I got : “Arducam choose to largely distribute binaries (which is slightly dodgy ground with regard the GPLv2 licence of the Linux kernel), and therefore they have to rebuild the libraries every time a new kernel version is released.”

Normaly as you said on your website with latest raspbian version, arducam driver is merged with raspbian and it should work by just adding “dtoverlay=arducam-pivariety”, but it does not… I spend hours and hours rather than working on my project to try to make it works…

Hi guys can I expect some help. Are you able on your side to make your IMX462 works on the last release of Raspbian just by adding dtoverlay=arducam-pivariety in config.txt file ?
Thanks

Please see the screenshot below: 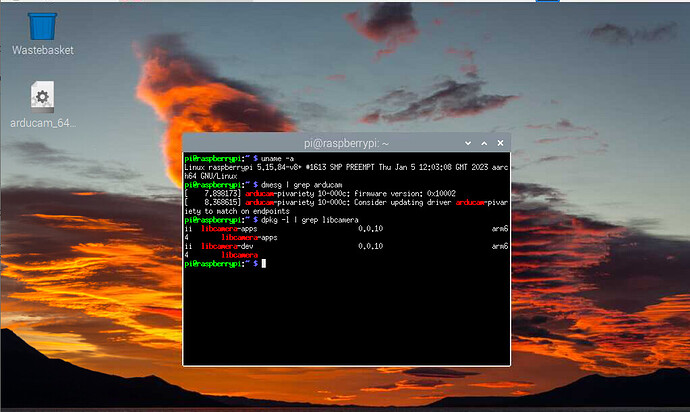 Hi,
I managed to access the camera on the 5.15.76. You said the latest version of Raspbian, I upgrade the kernel version today, but it is up to 5.15.84… But I think it has nothing to do with it.

That is also what I did to make the camera works.

However the big issue it is the dependency with your release of libcamera and not the official release, so we will not benefit from new release, bug corrections, …

Hi Dion, Can you confirm I need to install your libcamera-dev package rather than the preinstalled libcamera to make the IMX462 sensor work ?

Again when I install your libcamera-dev package it is then impossible to update raspbian and installed new packages. It seems that this installation breaks some dependencies.
Sounds like the same problem here : Can't get libcamera to work with UC-755 IMX462 on pi4 with latest PiOS - #10 by featherfurl

Can you help and answer previous questions ?

HI guys, can you just answer following question, do I have to install your libcamera-dev version or does the IMX462 sensor work with the official libcamera-dev distrib ? Thanks

Hi,
Yeah, please install the libcamera_dev and libcamera_apps from Arducam website and give it a try again.