Hello. upon testing it seems that indeed, the zero w does not support taking 64mp (9152x6944) directly using the libcamera-still command, due to not having enough memory, rendering a memory buffer allocation issue. However taking 16mp (4624x3472) works just fine. This along with the fact it is said to have the function of up to 10x optical zoom, got me thinking would it be possible to take a 64mp picture, by sticthing together 4 x 16mp zoomed pictures, on the pi zero w? as in zoom to a quarter of the screen, take a 16mp picture and repeat this 4 times resulting in 4 pictures which could be joined to get one 64mp image. It would be a viable option for me to get the 4 x 16mp quarter pictures unstiched, that could be handled outside of the pi, though ideally it would all be done locally and result in a 64mp image.

The aim of this would be to get a full resolution image without the memory lack issue, however it does raise the question whether the zooming and stiching wouldn’t use up even more memory?
Is taking a zoomed portion of an image without actually taking the whole image if that makes sense, possible? If the limitation is libcamera, are there any alternative lib’s like Picamera2 which could be of use here?

In short my question is, is it at all possible to utilise all 64mp on a zero w, or is it simply not possible without using a more powerful pi?

The method you describe is one we currently have products for, but it doesn’t do the job on pizero, and we don’t make them spell larger for memory allocation reasons.
Or if you have a requirement, you can contact [email protected] . 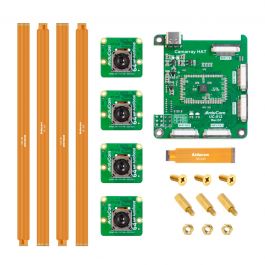