We have updated the script to install the driver, here are some instructions.

The function of automatic detection is to automatically install the corresponding driver for you when you don’t know the camera, and tell you which camera it is.

The automatic detection function is still being improved, if you have any questions, you can open another post to let me know.

And thanks to octoprint engineers for the advice

Our script for installing the driver has been upgraded. You can restart the installation script experience. At present, the script does not support the use of CM3/CM4. It does not maintain some older versions of the Raspberry Pi system.

Detect the camera and automatically install the corresponding driver for you.

Like this,if you see a prompt similar to the structure in the picture below, you can choose not to restart,otherwise a restart is required. 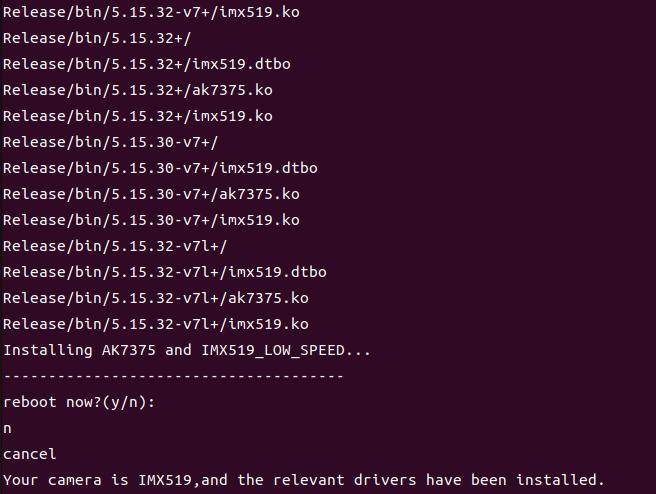 When I execute “./install_pivariety_pkgs.sh -d” I get this error message:

but it appears to run anyway and at the end I get:
Your camera does not need to install drivers.

Many operations require administrator privileges, so perhaps using sudo will make this less of an issue in the future.

The prompt that appears means that the i2c is not being read correctly, or that your camera does not need a driver installed. Can you give me any information about your camera model?

Maybe you are right, but I don’t run the scripts out of nowhere, and do not think them up myself.

The command lines are cut and pasted from various “how to” documents provided by your company. Sudo is often present in such copied and pasted lines, but not always.

Anyway this issue is not longer happening or not a problem, can be closed

Thanks and cheers
Bryn Parrott

I apologize for this, it’s a new feature still in beta and I’m grateful to the users who helped me discover this issue before it was released. Progress together.

By the way, in fact the most significant issue was found to be in build of ‘input-libcamera.so’ which is part of the mjpg-libcamera installation.

There was a bug in one file (/libcamera/controls.h) that cause compilation errors during the build, which then failed. Thus the camera output could not be viewed via http portal. But this was fixed yesterday, allowing me to proceed today.

But the main point is this:
I found and tried several versions of instructions to install the required firmware to support the camera on my Raspberry Pi. At the outset, EVERY SINGLE ONE of the instructions failed at some point. Clearly the instructions themselves are not being tested. And there are too many of them. Some might work on earlier Pi models, others latest version, some work with Octopi build, others do not. Some depend on Raspian 10, others want Raspian 11. But its often not clear which.
They might have worked in the past, but no longer work. My suggestion is to hunt them down and make them right, or eliminate them. They are just confusing.